This is an excerpt from Empathy Lessons (2018):

(17) Empathy is the ultimate anti-bullying anti-dote: Bullying is abroad in the land. Bullying is not just for high school anymore, but is getting called out (contained and transformed) in the work place, politics, social networking, the media, and the community. Bullying is about violating the boundaries between the bully and the target—personal, physical, emotional; empathy is about establishing and reestablishing boundariesbetween self and other.

Empathy is the antithesis of bullying. Wherever empathy lives, bullying has no place. When one thinks about it for two seconds, so are parenting, teaching, consulting, and being a traffic cop—all about setting boundaries. 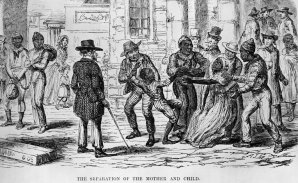 The anti-empath: Separation of mother and child

At least initially, establishing boundaries is notabout having empathy for the bully; it is about being firm about damage control and containing the bullying. When push comes to shove, the bully benefits even as the community is protected from his perpetrations; but more in the manner of a three year old child, who, in the midst of a tempter tantrum, benefits from being given a time-out in such a way that he cannot injure himself or others.

As noted in the chapter on bullying [in Empathy Lessons, which will not be repeated here], kids in middle school have usually developed empathy for those on the “inside” of their peer group. The developmental milestone for them is to expand their definition of “inside” and widen the circle of caring, making more of “them” into “us.” The manydifferent kinds of bullies, bullying, and possible responses and recommendations for children, students, teachers, parents, and administrators noted throughout the chapter on bullying will not be repeated here, only one great Thought with acapital “T”: if it’s mean, intervene.

(18) Empathy is closely related to humor: Both empathy and humor create and expand community. Both empathy and humor cross the boundary between self and other. However, empathy crosses the boundary between individuals with respect, recognition, care, finesse, artistry, appreciation, and acknowledgement, whereas humor does so with aggression, sexuality, or a testing of community standards. Here “aggression” includes language that people would find insulting.

Therefore, be careful. The aggression or sexuality in question is usually presented in such a way that it creates  tension by violating social standards, morals, or conventions, to a degree that causes stress short of eliciting a counter-aggression against the teller of the joke. Substituting humor for empathy can work in some situations, but in others it can create a breakdown in the would-be relationship. You know how the more objectionable the joke, the funnier it is? The result is either the release of stress through laughter or a failed joke and a shameful, if not scandalous, situation on the part of the joker. Indeed when the violation of the social convention, moral, or standard, is such that the target of the joke experiences a dignity violation, then the joke arouses anger or even rage, not laughter. The caution flag is out, even as we provide a couple of sample jokes.

For example, a man is driving a truck in the back of which are a group of penguins. The man gets pulled over for speeding by a police officer. The officer says: “I will let you off this time, but be sure to take those penguins to the zoo.” The next day the same man is driving the same truck with the exact same penguins. Only this time, the penguins are wearing sunglasses. The same police officer pulls the driver over again and says: “I thought I told you to take those penguins to the zoo!” The man replies: “I did. Yesterday we went to the zoo. Today we are going to the beach!” Pause for laugh. The point is that humor, among many things, is a way in which one speaks truth to power and gets away with it. In this case, one disobeys the police officer, and one gets way with it; one is technically in the clear. The mechanism of the joke is the ambiguous meaning of “takes someone to the zoo.” One can go to the zoo as a visitor to look at the animals or one can be incarcerated there, as are the animals on exhibit.

In conclusion, empathy is the foundation of community in a very deep way, for without empathy we would be unable to relate to other people. In being empathic with another person, one creates a community with the other person; likewise, with humor. Jokes (and humor) create a community between the audience and joke teller as the tension is dispelled in the laughter. For more on creating community through jokes, I recommend Ted Cohen’s Jokes: Philosophical Thoughts on Joking Matters, which also contains some really funny jokes.[i]Jokes create a kind of optical illusion, a verbal sleight of hand, that gets dispelled, releasing tension in laughter, pointing to the next item.

[Okay. I have read enough. I want all 30 empathy lessons from the complete book:]