By the end of George Makari’s engaging – indeed monumental – Soul Machine: The Invention of the Modern Mind (W.W. Norton 2016: 652 pp.) one comes to understand that 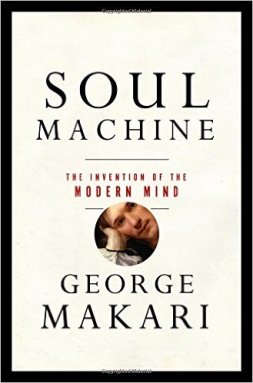 the modern mind is more ancient than most people believe and the ancient mind is more modern than one might have imagined. Makari works his way up to Johann Reil’s (1759 – 1813) coining of the term “psychiaterie,” Wilhelm Griesinger declaration that all mental illnesses are localized brain diseases (1845), and Johannes Müller’s (1801 – 1858) student Ernst Brücke (1819 – 1892), in whose lab Sigmund Freud would labor for many years dissecting the sexual organs of eels. Thus, Makari’s latest contribution provides a pre-quell to his own Freud book (Revolution in Mind: The Creation of Psychoanalysis (Harper Perennial, 2008, 613 pp.)).

The distinctive contribution of Makari’s Soul Machine is to explore the collision of scientific causality (mechanism) against religious doctrine,both committed to relieving the seemingly intractable forms of suffering that we today describe as “mental illness.” Makari depicts a war between the proponents of religion authority and the advocates of mechanically scientific explanations of psychic dynamics. Just as in war, truth is the first casualty; sometimes in ministering to a soul dis-eased, the would-be patient gets lost in the shuffle – and suffers.

The contribution of Michel Foucault in the debate is acknowledged but Makari parts company with him early on. The power structures of the prevailing episteme (or paradigm) have nothing to do with leveling the workforce to provide labor for early industrial capitalism, according to Makari, but rather with a conflict of ideas between scientific mechanism and authoritarian religiosity.

Yet religion itself is multi-faceted, complicating Makari’s account in engaging ways. For example, the Society of Friends, the Quakers, were themselves persecuted as enthusiasts and ecstatic worshippers by established religion – the quaking was possession by the Holy Spirit – yet they advocated the treatment of those seriously disturbed by the most humane methods that provided an example of best practices for the secular practitioners of the time. It is perhaps an anachronism on our part – an attribution to the past of distinctions that only exist in the present – to say that demon possession can be completely described without remainder as schizophrenia or multiple personality disorder or bipolar disorder. The grain of truth is that people have different ways of expressing their suffering. These ways are forms of life that are given by the community, society, and culture. Today most people – not all but most people – do not live like the devil and demons are abroad in the land. Our inner voice is verbal thinking, negative self talk, the echoes of teachers and parents, not the whisperings of satan.

In Makari’s fascinating history of the emergence of mind as a distinction, scientists debate what mechanisms account for the regularities in nature, while a pervasive risk lurks in the background that powerful religious authorities and their secular allies will punish the innovator and thinker for his heterodox views for seeming to undermine religious authority. Conversely, republican ideas of democracy and the equality of persons that undermine the idea that ruling monarchs or the dominant (ruling) class are directly blessed by God Almighty are inherently politically revolutionary in a way that is hard to imagine today when even genocidal, totalitarian dictatorships pretend to be democratic. Here Makari’s historical empathy is second to none – he gets inside the spirit of the time that brings it to life in subtle and powerful readings of the details; and it is not merely a pun to say that the devil is literally in the details.

Religion shows up in its dogmatic institutional incarnation – and from the tortures of the most Catholic Inquisition to hypocritical televangelists (who are not mentioned by Makari), religion in its all-too-human institutional implementations has often been a fraught and destructive force. Nevertheless, the role of pastoral counseling, doctors of the soul, such as Jung’s friend Oskar Pfister (1873 – 1956) and logotherapist Victor Frankl (1905 – 1997), strictly speaking, both falling outside the timeline of the work, have bridged the divide between mechanism and ministering to a mind dis-eased by conversation and counseling. What does not fall outside the timeline of the work is the conflict between authentic spirituality and religious authority. The conflicts that Makari highlights are largely between religious authority and scientific mechanism. Scientists will be afraid of religious authority as during the Renaissance and Reformation when such authorities had the power to make Galileo recant under the threat of torture; or scientists will align themselves with Immanuel Kant and limit theoretic knowledge to make room for faith. The subtlety and power of the latter position remains, in my opinion (and perhaps Makari’s too), unsurpassed either in the enlightenment or post-modern moments and movements.

Without using the term “Cognitive behavioral therapy,” it really does look like its inventor was the sagacious John Locke (1632 – 1704). Without using the phrase “interrupt the pathogenic thought”, Locke definitively defines Mental illness as a disorder of cognition and imagination and the cure requires a rearrangement of one’s thinking. Sounds like CBT to me. Still, this is not for the faint of heart. It would be a hearty soul indeed that set out to read John Locke to master CBT; and the best bet is to stick to Beck and Ellis if one proposes to perform CBT. But without explicitly calling it out, Makari makes clear that most of the essentials are already in place in Locke.

Meanwhile, the poster child – pardon the expression – for the political implications of mental illness is the madness of King George III. With an all-to-eager crown prince waiting in the wings to claim the throne, the royal physicians grew to seven and their disagreements expanded proportionally to their numbers. They did not agree at all. Enter Dr. Francis Willis, a not very distinguished country “mad doctor,” whose personal chemistry with the queen and eventually with George himself proved crucial to the cure. Still, Willis’s reports were written using the dramatic language of a battle royal between reason and the passions, the former eventually triumphing through persuasion and education. In short, the doctor kept the patient busy with healthy activities and spa-like treatments until the (possibly physiologically-based) disease remitted.

All the usual suspects are rounded up in an entertaining and enlightening romp through western civilization – Galan, Acquinas, Saint Augustine, Bacon, Hobbes, Pinel, Esquirol, Diderot, Descartes, Spinoza, Rousseau, Hume, Smith, and more. However, what is eye opening is the context in which religious authority and scientific freedom of thought perform an extraordinary martial art ballet like something out of “Crouching Tiger, Hidden Dragon” for the moral and political high ground. While I am in awe at Makari’s depth of knowledge and his engaging narrative, I am in one way dissatisfied. By my reading the role of the therapeutic alliance is missing, or at least substantially underemphasized, though Makari does occasionally call out the role of persuasion, the rapport, and suggestion. Scottish approaches to sympathy in building community, French accounts of sensibility, Gassner’s casting out of demons in exorcism, Mesmer’s account of animal magnetism, and Puységur’s hypnotism and “the rapport,” romantic ideas of the unconscious, the work of the alienist, somatiker and psychier, represent the underground history of human relatedness and the therapeutic alliance. That in the face of emotional turmoil, which does indeed require somatic compliance, a conversation with another human being is a powerful antidote to upset and distress. It’s all just a monumental misunderstanding and the one hidden, confounding variables that needs to be called out is the “therapeutic alliance,” a distinction that does not occur in the index nor (at least according to my reading) in the text itself.

Makari points out that in French and German there are no exact translations who the English word “mind” – in German “Seele” means “soul” and “Geist” means “spirit”. This leaves matters thoroughly muddled, which, in turn, contributes to the sense that all is spinning, that the center does not hold, and leaves the individual alienated from himself. One is tempted to say that, as with poetry, nothing is lost in translation, nothing except the “mind” itself. Sill, in the bigger picture, these are points designed to demonstrate that Makari’s work made me consider the mind and madness in ways that open up new fields for thinking and feeling. For my money, Makari’s Soul Machine ranks with the contribution of Henri Ellenberger on The Discovery of the Unconscious or Ian Hacking’s Rewriting the Soul, works that made the reader see familiar phenomena in new and engaging ways.

The author ends his narrative at the point of phrenology and its refutation. Even Gall’s failed attempt to map mental functions to bumps and surface features of the skull failed miserably, the truth of the attempt later emerged that mental functions could be localized to the underlying brain tissues. The debates continue. Perhaps Makari exhausted his word count with the publisher, though at 511 pages of text, not including extensive index and very fine notes, it is hard to imagine that another fifty pages would have mattered, at least allowing him to end with use of lithium salt, an otherwise toxic agent, to “cool down” mania (now bipolar) in its worst manifestations. The explicit eruption of the unconscious in the works of the hypnotists and Freud (the subject of the follow on volume) is pointed to but not explicitly expressed in the pen-ultimate chapter on “The Mind Eclipsed.”

This chapter on “The Mind Eclipsed” suggested to me that, paradoxically, the mind is both more and less than the mind. Less, because waiting in the wings is the distinction “unconscious,” which, though available in the romantics prior to Freud, would explode in the latter’s works in ways that forever change our understanding of human motivation and self-knowledge; more, because the spiritual dimension (as opposed to organized religion) is inherently undecidable and indeterminate – inherently “beyond.” Human beings are inherently more than any given static definition, and the project of freedom carries us beyond who we are into the future.

Like Loading...
‹ 3 Empathy Books: Meet the Author Book Signing: Short of breath? Empathy is oxygen for the soul! Get expanded empathy.
Empathy Triple Play: 3 books on empathy: hear about the book that got me thrown out of the local institute for psychoanalysis ›