3 Empathy Books: Meet the Author Book Signing: Short of breath? Empathy is oxygen for the soul! Get expanded empathy. 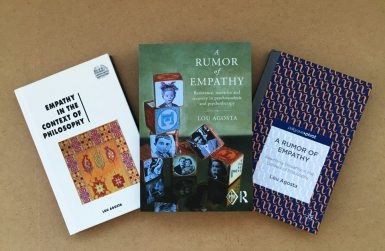 Join me in person for a reading, interactive dialogue, and book signing on Wednesday Feb 10th, 2016 at 6 pm at the Seminary Coop Bookstore (5751 S. Woodlawn 60637). Empathy is oxygen for the soul. So if you find yourself short of breath in the New Year, maybe, just maybe, what one needs is expanded empathy. After reading the latest headlines, we all need expanded empathy. You do not want to miss this event and its contribution to expanding empathy and building a community of empathic leaders …

Empathy? I know what you feel because I feel it, too, as a vicarious experience, not a merger. It is not as if parents, teachers, doctors, therapists, 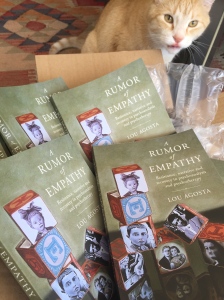 A Rumor of Empathy, the book, being admired by Paka, the cat

lawyers, customer service representatives, friends, and neighbors, needed a philosopher or psychologist to tell them what empathy is; however, clarification of the distinction is provided. Dynamic psychotherapy and psychoanalysis can accomplish things that no other methods can achieve in transforming human suffering into possibility. When all the philosophical arguments are complete, when all the transference and countertransference is analyzed, when all the phenomenological methods are reduced, when all the neuropeptides are metabolized, when all the hermeneutic circles are spun out, in empathy, one is quite simply in the presence of another human being.

Here is the short version of the short  version of A Rumor of Empathy: Rewriting Empathy in the Context of Philosophy: The deep, underground history of empathy is surfaced and reconstructed in Hume, Kant, Lipps, Freud, Scheler, Stein, 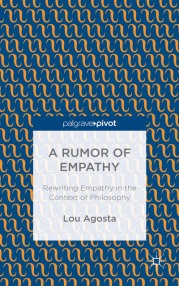 A Rumor of Empathy: Rewriting Empathy in the Context of Philosophy

and Husserl. A rumor of empathy is engaged in vicarious feeling, receptivity, empathic understanding, empathic interpretation, and empathic intersubjectivity. A rumor of empathy becomes a scandal of empathy in Lipps’ projections and Strachey’s mistranslations. Empathy is reconstructed in Hume’s many meanings of “sympathy”; in Kant on “the communicability of feelings” and “enlarged thinking” of the other; in Freud’s introspection and free association; in Scheler’s “vicarious experience” and perception of The Other; in Stein’s sensual empathy; and in Husserl’s late writing on empathic windows of consciousness accessing other persons as Husserl’s empathy moves from the periphery to the foundation of community. How “empathy” emerged from sympathy, fellow feeling, vicarious feeling, aesthetics, and story telling is discussed through the lens of methods of inquiry including phenomenology, hermeneutics, psychoanalysis, and  linguistic philosophy.

Those into a Heideggerian account of empathy with further work in Searle’s speech act approach, Husserl, and Kohut will want to read this one:

This work applies the basic distinctions of human existence from Heidegger’s Being and Time such as understanding, interpretation, speech, and affectivity (Befindlichkeit), to generate an  account of empathy as an interpretive (hermeneutic) circle that applies to psychotherapy, education, aesthetics, and diverse forms of human relatedness. This provides a breakthrough account of empathy that organizes the conflicting data and positions in the field into a unified, coherent, and powerful approach to empathy that makes a profound difference in being empathically in the presence of other human beings without anything else added.

Even if you live in Denmark and are remote from Chicago, you may usefully know about Semcoop.com – and this work on empathy! The Seminary Coop was one of the world’s great bookstores even before the Internet “blew up” publishing and the Semcoop.com front table (and inventory) is available on line. Meanwhile …

For further details on Dr Agosta’s practice in empathy therapy, consulting, and education see www.LouAgosta.com If you want to get some empathy, get in touch with Lou!

Credit: Lou Marinoff, Ph.D. has published a book Plato, Not Prozac! (Harper Press), which I liked so much that I the title – with attribution – for a chapter heading in my A Rumor of Empathy: Resistance, Narrative, Recovery that is the occasion for this post. Thanks, Lou! – www.loumarinoff.com/books/